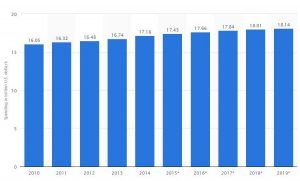 According to another source called Standard Media Index, in February 2016 there was an increase of 22% of the total expenditure for radio advertising comparing it to February 2015. Its increase was noted to be higher than digital media which is only 21%. Newspaper ad spending goes down by 17%, the television ad spending has the least increase. It was only 5% and out-of-home advertising was up 10%. Furthermore, internet radio advertising is increasing its revenue by 63%.

Radio on internet and connected devices

Mobile phones, smartphones and other connected devices are blessing to radio advertisers. These devices give an opportunity for customers to listen to radio on the go. Whenever they go, they can listen to it and they could even gather information about news products and brands.

Some radio markets have established on digital radio. This is an advantage to them since they can be available in connected devices and now they are available online. From a forecast for the year 2019, mobile Internet users will become 58.5% of the total population.

Countries that help the growth of radio ad revenue

Out of all the countries in the world, the United States will remain to be the top 1 in the radio market. The total revenue of the radio advertising in the United States is 44.6% out of all revenue in advertising. Moreover, the markets in the countries of China and India are said to be the most significant contributor to the total revenue of the radio advertising.  These countries will definitely drive the growth of the total expenditure for radio advertising. On the other hand, Japan, the most technological and advanced country will be going to extremely decrease their expenditure on radio ad. One cause of this is because of the applications that were innovated such as streaming music services.